Most contractors go to great lengths to improve the reputation of our chosen profession. Continuing education and becoming familiar with new products and codes is just the beginning. As a remodeling contractor I walk into many homes with a cloud of doubt over me as everyone has heard contractor nightmare stories.

I too have heard these stories but I have only seen a few with my own eyes. It’s much more common to see well intentioned homeowners trying to save money and making mistakes, than it is to see other contractor mistakes. This is why I was so disappointed to walk into a bathroom remodeled by a licensed contractor that looked as bad as any homeowner patch job I’ve seen.

The bathroom in question was done so poorly that the client volunteered to gut the bathroom down to the studs if we could help her put it back together. The visual inadequacies were just the tip of the iceberg.

The electrical was the most disturbing. We found improper and dangerous electrical work, not done to code, or by and electrician. This meant the homeowner had to bring in an electrician to undo all of the bad work before he could begin rewiring the bathroom correctly.

Our plumber could not sign off of the plumbing work that was done in order to get permits. This meant that all of the plumbing done had to be removed and redone from scratch. The layout was so poorly thought through that the vanity would not fit on the wall because plumbing lines were in the way.

This client saved money using a contractor who did “all of their own work” but most people don’t realize that a contractor is required by law to hire licensed electricians and plumbers. Just being a contractor does not mean a person is qualified to perform specialty trade work.

When you are seeking a contractor ask who will be pulling the permits. If the contractor asks you to pull the permits or says we don’t need to pull permits, it’s a huge red flag. One of the most important jobs of a general contractor is to build relationships with trade companies and craftsmen.

This is a true story and the contractor in this story wrote a check to the client in an attempt to keep them from filing a contractors board complaint. The client planned on using the money to help pay for having the bathroom redone, unfortunately the check bounced. 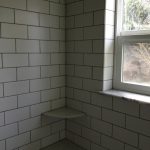 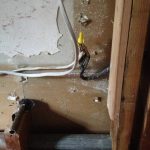 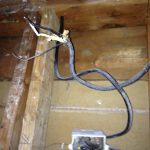